skip to main | skip to sidebar

2010/11: When opportunity knocked - and Arsenal couldn't find the door key

Words: 831. Estimated reading time: 3 minutes.
As the dust settles on our season, it is time to reflect and see where things went right and wrong – and judge whether Arsene Wenger’s assessment is correct.

Here are some of his words from the past few weeks after being asked to identify why we failed to properly challenge for the title.

“We are the best away team…” “…we have the technical quality to win the league but certainly not the defensive solidity…” “…it is as well the season that we produced our best games ever – but in the end it was difficult to get over the line.”

Before I begin ranting and dissecting, here are some pertinent statistics:
Half truths
Wenger, as is typical with most managers, has over-played the achievements of this season.

The argument about us being the best away team is the most deceptive of all considering that in the past seven years the best away points total has been way above our 31: 36 last season, 44, 42, 42, 39 and 48. Indeed, in the past five years (the Ashburton Grove era), 31 has been our average away points total, compared to 36 in the five previous years. So our away performances this year haven’t really been out of the ordinary, it’s just everyone else’s has been unusually poor – Man U claiming 25 points and Chelsea 26.

He is on more solid ground when acknowledging how weak our defence has been, even though it had appeared to be stronger since the departures of Silvestre, Gallas and Campbell and the limited involvement of Almunia. Look particularly at the goals conceded away – 28 this year and on the rise for the past seven seasons. It is worth noting that Wenger’s championship teams conceded, in reverse order, 12, 11 and 23 goals away all season. In fairness, this season’s champions conceded 25 though last season’s conceded 16.

The Emirates effect
Meanwhile, moving off on a slight tangent, I wonder if there is a clue to be found in our Ashburton Grove statistics about why we’ve never managed to be seen as champions-in-waiting.

Our home points total since moving to Ashburton Grove has been on average almost three less per season than the previous five years at Highbury (42.2 compared to 45). That is not that staggering but is obviously a factor in our performance, especially since Man U and Chelsea have averaged 50.6 and 44.4 respectively over the same time.

What could be of more significance is that although our defence is performing better since the move (average 0.77 goals conceded per game, 14.6 over the season, compared to 0.96 and 18.2), the attack has dried up by a greater amount and is scoring almost one goal less per game: 2.02gpg (38.4 per season) compared to 2.9gpg (46.2) in the last five years Highbury. 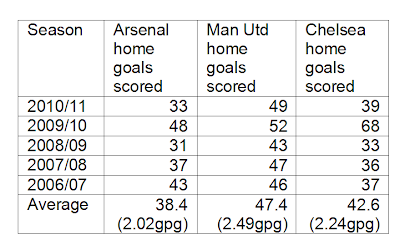 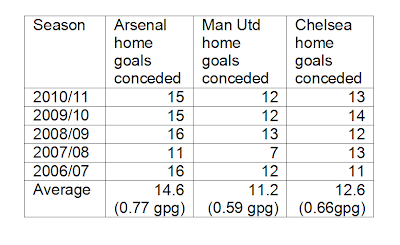 I wonder if our drop in firepower could be a factor in the side failing to generate genuine championship excitement and momentum? Teams come to the Grove knowing it is unlikely they will get blown away and for a side that will always need to rely on its attack more than its defence, it is a major flaw. It also casts Wenger’s claim that we have the technical quality to win the league in a different light.

It’s all relative
This was a season of opportunity which has been wasted. Man Utd were weaker than previous years, Chelsea suffered from injuries and loss of form and the title could have been ours if Wenger had made the right investment last summer. Instead we were equally weaker and couldn’t move above them. The fact that our points total would have only been good enough for fifth place in the past three seasons shows how the top sides’ performance dipped.

Today, the wider footballing world appears to have finally reached the same conclusions on a number of players and the faults of the team (defensive weakness, lack of balance in the team, not enough quality in depth) that most Arsenal supporters grasped last year, if not earlier.

Wenger failed to identify them at that time and so they remained evident throughout this season. His comments about how we produced some of our “best games ever” this year do not inspire hope that the penny has dropped for Wenger yet.
Posted by John B at 09:14

All comments are moderated before being published. Please add a name.

A is for Arsenal was established in 2010 in attempt to add something new and original to the dozens of websites and blogs devoted to England’s greatest football club.
Every entry follows six golden rules. 1: Never be driven by clicks. 2: No news summaries. 3: Try to be vaguely intelligent and original. 4: No 2,000 word essays. 5: No spurious transfer speculation. 6: Nothing to say? Say nothing.
You can contact the blog by adding a comment to any entry.

A is for Arsenal Archive

John B
I attended my first Arsenal game as a 12-year-old and started contributing to the Gooner fanzine not long after. Now I focus on my occasional A is for Arsenal blog and twitter account.